Our Exhibitor News page is the ideal place to learn all about the fantastic work our exhibitors have been doing in recent months. Look out for new product announcements, browse through self-build case studies or discover fantastic competitions that will be running at our Build It Live shows!

The exhibitors at Build It Live and range from windows and doors suppliers to timber frame specialists, renewable energy providers and design & home build package companies. Whatever you need for your self-build or renovation project, you’re sure to find it at Build It Live. New product news from our Build It Live exhibitors will be coming soon! 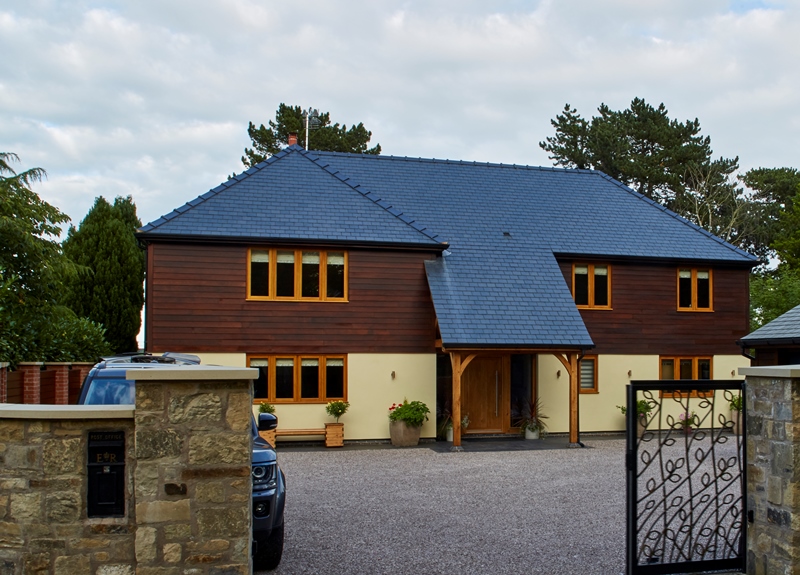 A mixture of modern style and traditional character, Peter Williams’ oak frame home has been finished to perfection. It’s a home that has been expertly crafted to suit the requirements of himself and his wife Pauline; the couple couldn’t be more proud of what they have achieved.

The front of the home is fairly traditional in shape, although with a few contemporary touches (such as the dark weatherboarding and render mix) that set it apart from many of the homes in the area. But it is the rear of the property where the real drama happens – the full height glazing set within oak frame windows is simply stunning – offering the house an abundance of natural light, and giving the owners glorious views of the garden and countryside beyond.

This home has been created to surpass the dreams of the homeowners. They had given up hope of self building, but thanks to some good advice from Welsh Oak, along with Emyr’s ability to translate the owners’ requirements into something spectacular, the Williams family have truly got the house of their dreams.

Peter Williams thought he had found a fantastic renovation opportunity. The house was not up to modern standards; it had been configured in an awkward and clunky way. Additions over the years hadn’t been done to their best and overall, the property was in need of some TLC. The original house dated back to the 1960s – it had a flat roof and numerous later additions dating back to the 1980s – the layout was terrible – the kitchen was in the middle of the house, and the kitchen window didn’t even open out to the garden – it opened into a sunroom. When Emyr Davies and Peter Edmunds came to visit the site, they instantly knew that renovating this house would cost a fortune, and not only that, the renovation works would have still left the Williams family with a house full of compromises. Instead, the pair explained to Peter how taking on a knock down and rebuild project would not only be quicker, cheaper and easier, but it would ensure that he could have his dream home and include all the elements he had been dreaming of. Peter says: “We knew that if we renovated, everything would have been a compromise. We wanted high tech and all the mod cons – that would be hard in a renovation. Also, Welsh Oak made a great point: If I self-built it would be better with VAT, as I could claim it back at the end. It just made sense.”

“Emyr took the brief and created what I couldn’t,” says Peter. “It was perfect. Everything I had asked was there. I had described that I wanted lots of glass at the back, a full-height atrium and at the front I wanted it to me more enclosed – I wanted a ‘glazed-style’ roof – and I wanted this incorporated with a cottage-like feel. Sounds impossible – but he came up with the perfect plans!” 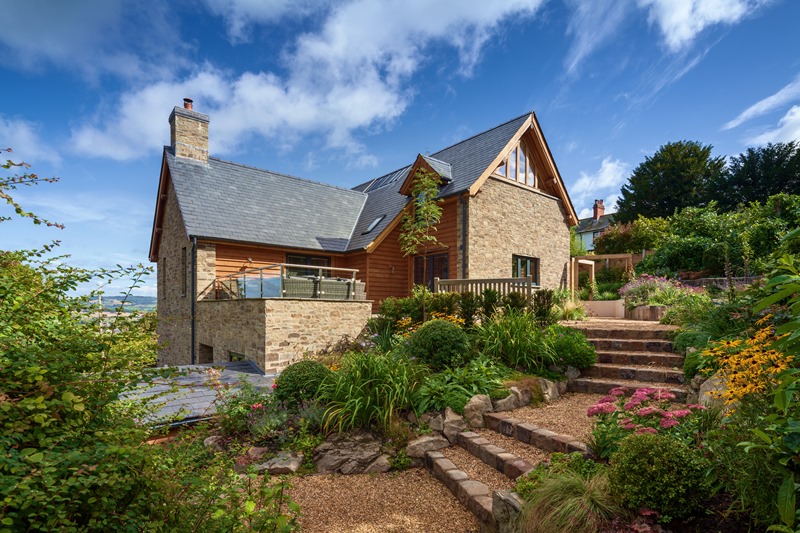 The Perrins had been looking for a house to retire in when they came across a garden plot for sale on the edge of the charming village of Montgomery, Wales. Situated on a quiet, single access lane, the site had an existing planning permission for a mock Victorian four-bedroom house with an outdated interior of individual, closed off living spaces. The couple were keen to update the existing design with something that was externally more in-keeping with the local vernacular with a modern open-plan interior. They also wanted an energy efficient property that utilised local materials. The site presented many challenges, particularly a sloping site.

A stunning oak-frame house was designed to not only make the most of the beautiful rural views, but to sit neatly into the hillside. A double-fronted garage sits at lower ground floor level with a utility and hobby room beyond. Windows on the side elevation provide essential natural light to the underground space. A set of stairs to the left of the house lead you up to the front door and into the ground-floor open-plan kitchen, dining and living area with a vaulted double-height ceiling and glass gable end wall providing beautiful countryside views and lots of natural light. Outdoor decking sits on top of the hobby space and utility below. A modern staircase leads up to the master bedroom and en-suite, two guest bedrooms and a family bathroom.

Internally, the frame has been used to dramatic effect. The structural beams have been left exposed providing characterful charm, while a vaulted ceiling in the open-plan area allows views right up to the rooflights and sky above and floods the interior with natural light. In addition, a large glass wall on the gable end provides views out on to the countryside and again, fills the open-plan area with oodles of natural light.

“We were really happy with the service that Welsh Oak Frame provided. The design for the difficult site was perfect for what we wanted to achieve. We had queries from time to time, and the Welsh Oak Frame team were always on hand to provide extra information, essential advice and solutions to any problems that arose throughout the project. The team was also willing to come out to the site if they were ever needed throughout the build.”

Need your home adapted for accessibility & sustainability reasons? Gartec has been at the forefront of the platform lift industry for over 20 years, and are the UK’s leading supplier and installer of platform lifts. Read more about the following 3 projects that has transformed and improved the quality of life of these homeowners.

Also available, James Dean Estates working in association with Frame Technologies have a rare opportunity for individuals to buy a self-build plot on what will be a select development of four homes a level walk from the centre of Builth Wells. Plot 1 currently SOLD subject to contract. Find out more – Plots 1-4 Builth Wells 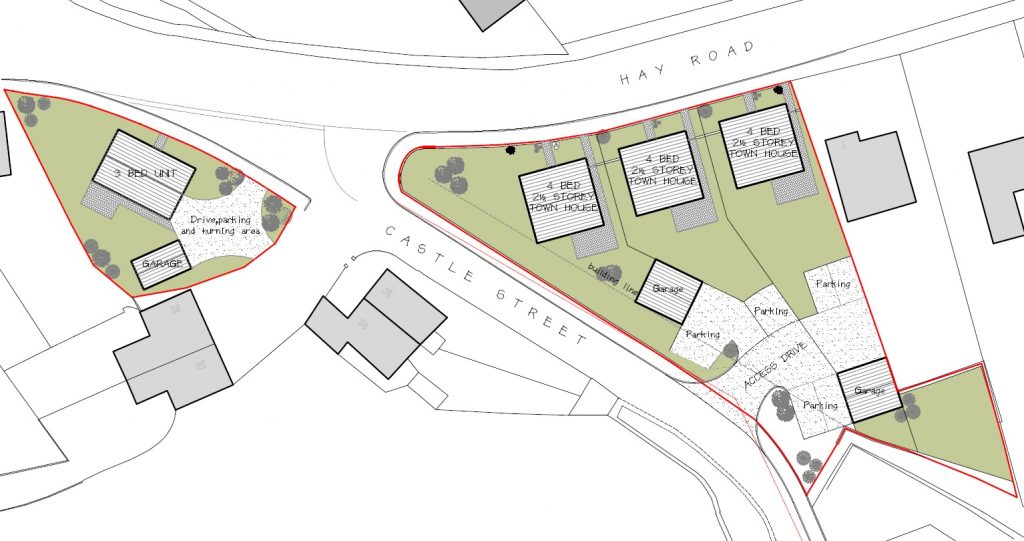 Kitchens4Diy.com transformed one of their client’s kitchens into a beautiful open space by knocking down a wall between the original kitchen and dining space. In doing so, they were able to create the family environment they were looking for, enabling their 2 young children to play in the other half of the room while cooking.

They wanted a dramatic industrial look which they achieved with Fitzroy painted doors, fitting perfectly with its simple versatile style & its ability to create clean modern lines. Graphite coloured cabinetry gave the kitchen the desired dramatic look and tied in perfectly with new fitted graphite windows and original oak parquet flooring. In order to differentiate between the dining & cooking area, the client wanted a standalone piece of furniture in a different door style and colour. Kitchens4Diy.com picked a 1909 in-frame with penciled scallop, painted in partridge grey and a solid oak worktop. The colour of the furniture was kept within the same grey tonal range and antique brass knobs kept it consistent with the furniture in the kitchen area.

– By placing the Belfast sink central to the window, they placed two dishwashers either side to create symmetry.
– For storage purposes and to keep dangerous appliances away from the little ones, a tall bank of units were incorporated which housed oven, warming drawer, a tandem pull-out and a tall fridge /freezer.
– The tall units created a large expanse of Graphite colour, so advised to expose the brick on the remaining section of wall to create warmth and texture. Their client positioned her raw metal and copper valve radiator on this exposed brick wall to really create a feature.